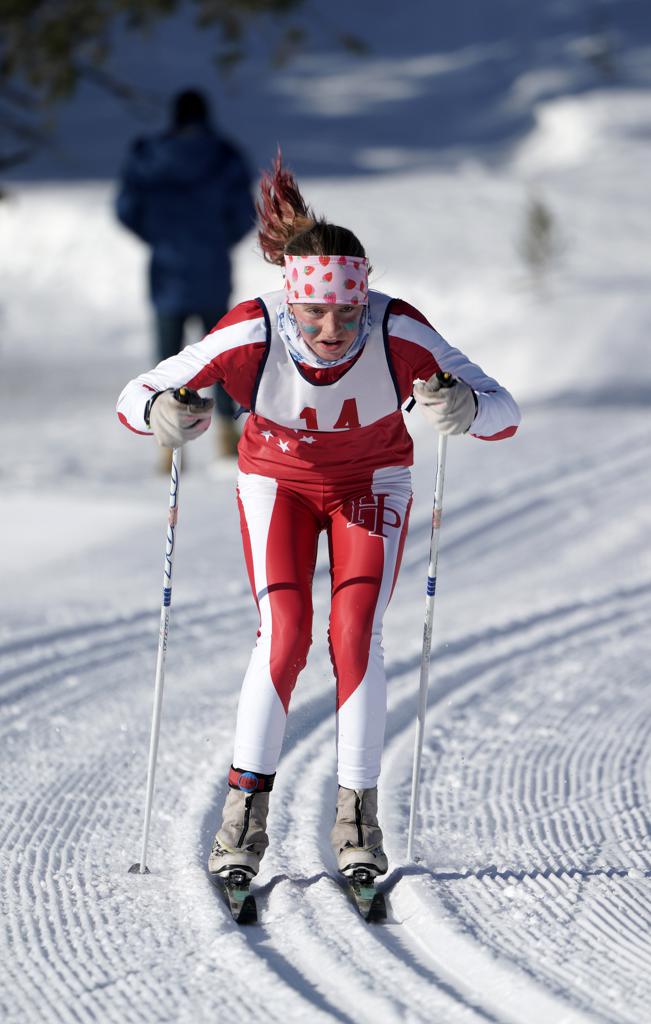 Molly Moening is very aware of where she finishes in the standings. Not only in the Nordic skiing state meet, but within her own household.

The youngest of three children, Moening has always looked up to her oldest sister Erin — currently a junior in college, skiing for Northern Michigan — as the benchmark for success, constantly comparing her own results to where her sister was when she was her age.

Now the sophomore skier from St. Paul Highland Park, who has qualified for every state meet in cross-country, Nordic and track and field since seventh grade, heads into Nordic skiing state meet on Friday as a favorites to do something neither of her sisters have been able to: win a state championship.

“That is something I could top her with,” Moening said with a laugh. She finished sixth in the state meet a year ago.

After finishing 18th in the state meet two years ago as an eighth-grader, Moening’s joy of earning all-state honors quickly subsided when she realized it was one spot worse than Erin had finished in eighth grade. On the flip side, Moening was quick to text her sister following her first-place finish in the section meet last week, her third section title in four years, one more than her sister had in high school.

“Molly’s been tagging around since day one always trying to keep up with her bigger sister,” said Brad Moening, the girls’ father and 19-year coach of the boys’ and girls’ Nordic teams at Highland Park. “They keep tabs on each other pretty closely.”

Not only does Molly Moening have an individual state title on the mind, she’s hoping to see her team stand atop of the podium for the first time in school history. The Scots finished second in last year’s state meet behind Armstrong but return their top six finishers from last season while the Falcons graduated their top five skiers.

“Immediately after the state meet last year, we had our eyes set on winning it this year,” Molly Moening said. “We are just so hungry for that title this year.”

Cole Johnson of St. Paul Highland Park pushed himself in the classic race.

The boys’ team also returns to the state after finishing eighth last season. It’s eyeing a top-three finish and is led by senior Cole Johnson. It’s been a breakout season for Johnson, who finished 72nd in the state meet last year, but could crack the top 10 this time around after winning the section meet by nearly 40 seconds. Brad Moening credited Johnson for “getting serious” over the offseason with the hopes he could race in college.

“I was really inspired this summer to make the most of the time I had to train,” Johnson said.

He saw his hard work pay off, finishing second in the Mesabi East Invitational at Giants Ridge in January.

“I stuck him in the classic race figuring we might see how good he really was,” Brad Moening said. “It told me he could handle the hills. I’m pretty excited to see how he does at state.”

The top eight teams are back for another crack at the boys’ team title. Last year’s champion Sartell-St. Stephen/St. Cloud Cathedral return five skiers with state meet experience but lost individual state runner-up Alex Nemeth to graduation. Nemeth’s brothers Will and Zach — both juniors — are the team’s top returners. They finished 18th and 19th last year.

The meet was moved to Friday amid concerns about skier safety in forecasted sub-zero temperatures on Thursday.

Paul Hodowanic (paul.hodowanic@startribune.com) is a University of Minnesota student on assignment for the Star Tribune.