Eight sets of siblings — 17 skiers in all — help anchor the speedy Ranger boys’ and girls’ teams, among the favorites to bring home state championships next month. 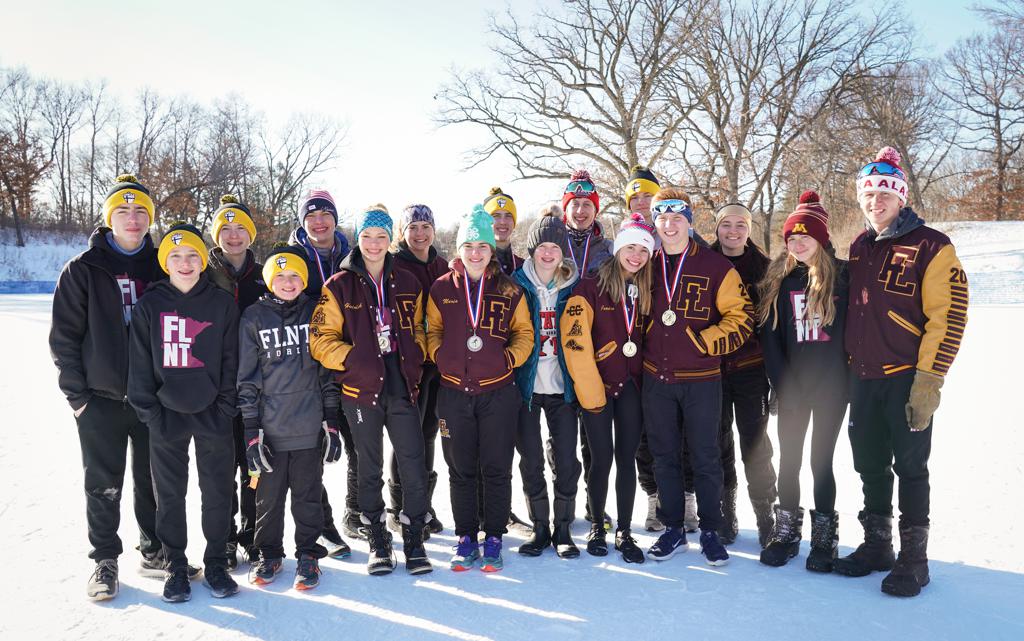 When first-year coach Ryan Wright talks about his hopes for the top-ranked Forest Lake boys’ and girls’ Nordic ski teams, his notions of working together like family strike an unusually personal chord.

Between the two teams, the Rangers have eight sets of siblings.

The group of 11 boys and six girls includes some of the fastest skiers in the state. They compete on teams that both finished on top of the nearly 60-school Mesabi East Invitational at Giants Ridge in Biwabik earlier this month.

“Once I started skiing I got hooked,” said Ethan Erickson, a senior captain of the boys’ team. “Then my brother (sophomore Noah) and sister (eighth-grader Chloe) followed and got hooked. I think that’s what happened with the other families, too. It’s become an entire family thing to do.”

It has made Wright’s job a lot easier. He helped the Rangers to back-to-back boys’ team state championships in 2008 and 2009. Now he oversees a program that has won six state boys’ titles. The girls’ program, which produced an individual champion in Stephanie Howe in 2002, is seeking its first girls’ team title this season.

“I was fortunate enough to find success in Nordic skiing both individually and as a team,” said Wright, who finished fourth in 2008 and third in 2009. “While my hard work and accomplishments were something I was very proud of, it was nothing compared to the joy I felt sharing a team state championship with all of my teammates and closest friends.”

He continued, “I want the kids to have that same feeling of sharing a team title and all of their accomplishments with their teammates, while the camaraderie of teamwork and partnership bring the individuals together like family.” 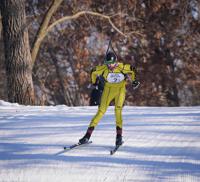 Ethan Erickson competed at the ABC Relays at Wirth Park in Minneapolis.

The Erickson brothers are both ranked in the top 20 individually by Skinnyski.com. On the girls’ side, freshman Jordan Parent is ranked No. 4 in the state. Her brother Nick, a senior, skis for the boys’ team.

“It’s a really friendly atmosphere,” said Jordan Parent, whose older sister, 2018 graduate Jenna, got the Parent family started in the sport. ”We’re all connected to each other.”

Other sibling skiers include:

“Over half of the team comes from only eight families,” Wright said. “They are a great group as a whole. Helpful parents, hard working and respectful kids. Makes my job as a coach much simpler.”

One of Wright’s up-and-coming youngsters on the boys’ team, sophomore Ethan Hebert, could make things even easier.

“He shows a lot of talent as a sprinter,” Wright said. “And, oh yeah, he’s the oldest of seven kids in his family. More talented siblings to come, hopefully.”

There are other key components to the Rangers’ future success besides the siblings. Junior Amelea Hauer is one of three captains and ranked in top 20 individually on the girls’ side.

“Amelea is an outstanding leader and a super-talented skier,” Wright said. “She has big goals for herself and this team as well and is uber-motivated.”

Both squads hope to get back to Giants Ridge for the state meet in the middle of February. If both teams qualify for the event, a large contingent of the siblings will make up each team’s seven-skier roster. 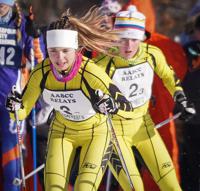 Jordan Parent began her relay leg after teammate Amelea Hauer tagged her during the ABC Relays.

“The team is more important than what you do individually,” Jordan Parent said. “It’s all about working together. It’s what you accomplish as a group that’s most important. That’s what team work really means.”

Ethan Erickson added: “Our team goals are the same. We want to be the voice of Forest Lake, and for future athletes at the school.”

All set in motion through hard work.

“Five hours into a six-hour training ski up at Christmas camp, in the pouring rain no less, Amelea and I came across Chloe and Evelyn skiing a dozen or so kilometers away from the trail head,” Wright said. “After all other skiers went in to get out of the rain, those three girls kept skiing with me, working hard and talking about their goals for the ski season. Never a complaint to be heard.”

Or as Ethan Erickson says, “Forest Lake isn’t exactly the mecca of Nordic skiing geographically. We have a storied history because we work hard while still having fun.”

Their motto this year is simple: “Be the First.”

Forest Lake Nordic skiing coach Ryan Wright, who skied on Ranger teams that won state championships in 2008 and 2009, is in his first season at the helm of the boys’ and girls’ programs.

What got you into coaching?
“Coaching kind of just fell into my lap this fall. I was lucky to have had the opportunity to ski for two great coaches in high school and college. Deno Johnson (Forest Lake) and Chad Salmela (St. Scholastica) not only taught me what I know about skiing, but left me with a lot of great life lessons as well. I hope to have the same impact on my athletes as well.”

What are your goals for the program?
“My goals are in line with the reason why I took this job. I want to develop successful student-athletes, who can carry the fundamentals of work ethic, respect and time management with them through life — beyond their time as Nordic skiers. I hope to leave a lasting impression on my athletes, like my past coaches so positively left on me.”