The sophomore won the individual state title and helped the Scots to their first team title. The boys' winner was Henry Snider of Mounds Park Academy while Forest Lake claimed the team championship. 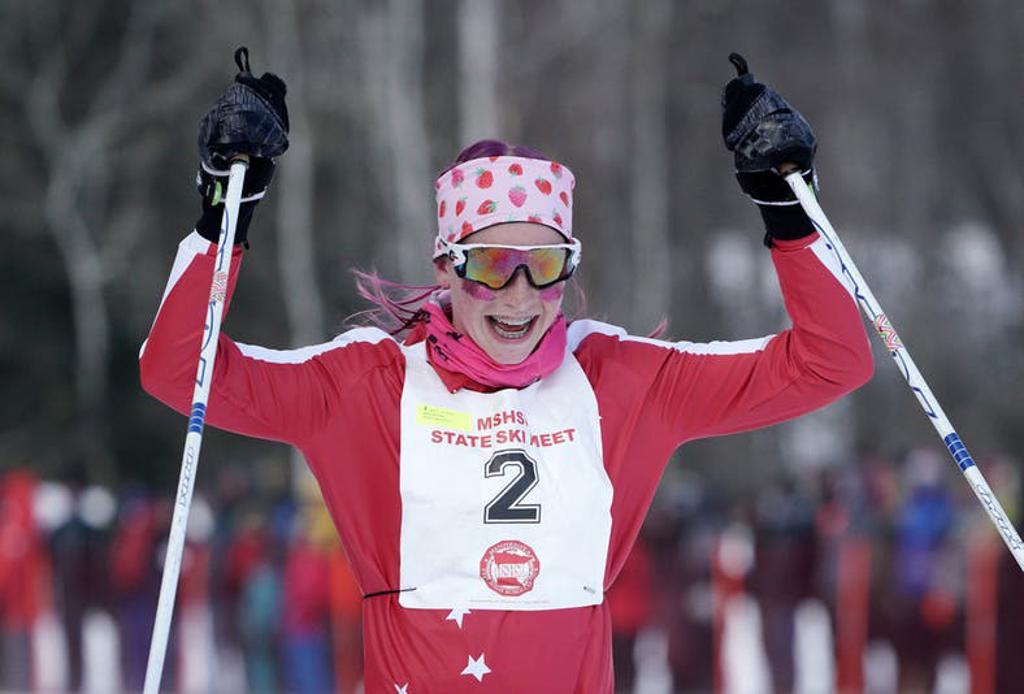 BIWABIK, MINN. — Molly Moening had to get to the hill first. With 12 seconds to make up and the wind picking up, she knew catching Libby Tuttle early was the key to victory, for her and her team.

Moening took home the girls’ Nordic skiing individual title on Friday at Giants Ridge with a time of 32:16.1. She helped propel St. Paul Highland Park to its first team championship with 408 points.

“I couldn’t have asked for anything better,” the sophomore said. “I’m super proud of all of them.”

Tuttle, a senior from Stillwater, started the afternoon’s classic-style chase after a strong freestyle finish in her morning run. Thrashing her way out of the gate, Tuttle set a strong pace but was soon overtaken by Moening.

“I caught her right before the uphill, and my skis were amazing and I was gliding up the hill,” Moening said. “Coming down I was pushing as hard as I could and flying down the hill.”

Those were her sister’s skis — Erin Moening’s name still written in marker near the bindings — carrying her to the finish about 52 seconds ahead of second place. Molly Moening, the youngest of three sisters, brought home the first state championship for the Moening family. (Their father, Brad Moening, is the Nordic coach at Highland Park.)

For Highland Park, the team victory was a long time coming.

“All of these girls, we’ve been skiing together for a while,” Moening said. “In eighth grade, our coach pulled us aside and said ‘You are really good, if you keep improving you can be state champs someday.’

“It was a lot of believing in ourselves and setting high goals for ourselves.”

Before results were official, Moening was asked what she would think about an individual and team win: “That would be the happiest day of my life.”Forest Lake finished second with 396 points behind strong finishes by freshman Jordan Parent and junior Amelea Hauer. Stillwater, with 361 points, placed third, led by Tuttle and Liv Myers.

Henry Snider of Mounds Park Academy, right, edged Roger Anderson of Armstrong at the finish line to win the boys’ pursuit title by less than a second. Similarly close was the boys’ team title: Forest Lake won it in a tiebreaker.

Down to the wire

As Henry Snider and Roger Anderson rounded the final corner, it was anyone’s race.

A few seconds later, it was Snider’s race.

The senior from Mounds Park Academy, from a class of just 55 students, delivered a photo finish after a four-year campaign for a state championship.

“It felt amazing,” Snider said. “I never expected this — since my freshman year, I’ve always dreamed of being a state champion.”

It was “summer training, dedication, and a love of the sport” that made the dream come true, he said.

In fourth place after the morning freestyle race, Snider had to overcome a 12-second advantage from Roger Anderson, who was the only skier to post a sub-14-minute first run.

Snider was up for the challenge.

“I’m always better at the second race. I knew it was definitely possible,” he said.

Anderson and Snider traded the lead a few times. In the final push it was Snider sliding past the finish line, recording a 28:24.2 total pursuit.

Anderson, a junior from Robbinsdale Armstrong, was less than a second behind with a 28.24.8 finish.

Snider finished sixth last year and was one of just two of last year’s top-10 finishers returning to the state meet this year.

Forest Lake pulled in the team victory, winning a tiebreaker with Minneapolis Southwest. Both teams had 401 points but Forest Lake’s combined times ended up slightly faster.

The meet was originally scheduled for Thursday but was delayed due to extreme wind chills. It was still a frosty afternoon, and the wind picked up late. Still, hundreds of spectators and more than 300 skiers took it in stride as the sun beamed down throughout the day.