A senior from St. Paul Highland Park, she would join Olympian Jessie Diggins among three-time winners. 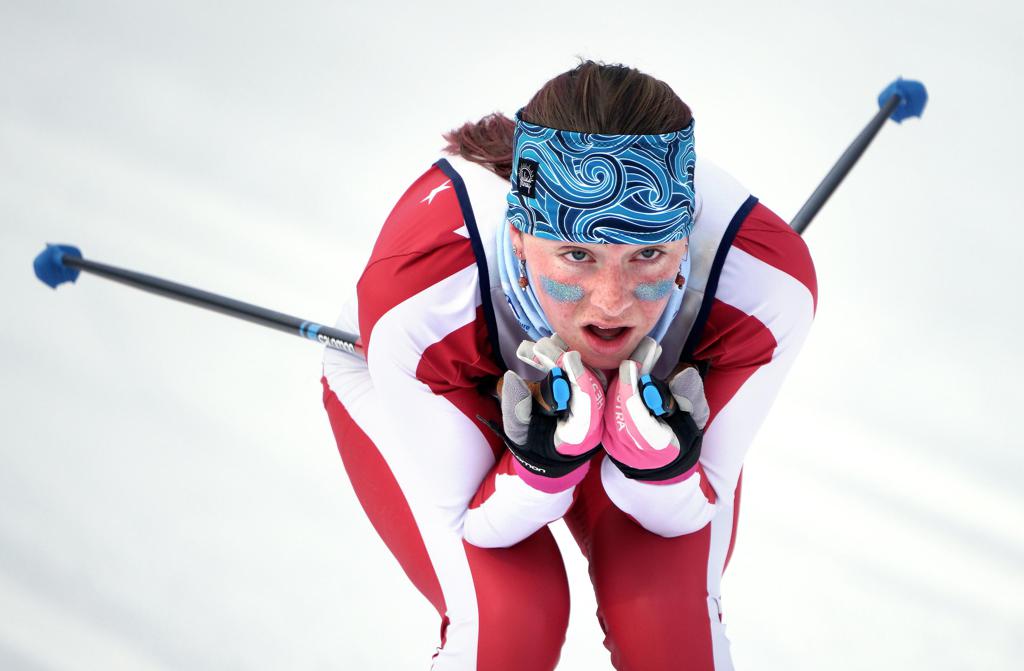 Molly Moening is a section champion for the fourth time and will participate in her sixth Nordic skiing state meet. Photo by BRIAN PETERSON, Star Tribune

Molly Moening isn’t the type to call herself elite. She will admit she has an opportunity to join select company.

A St. Paul Highland Park senior, Moening can become only the fourth girls’ Nordic skier in Minnesota to win three state championships. The state meet will begin Wednesday and conclude Thursday at Giants Ridge in Biwabik.

The most recent skier to win three state titles never stopped winning. That was Olympian Jessie Diggins, already a bronze medal winner at the Beijing Olympics and competing for more this week.

“I think every skier in this state looks up to Jessie,” Moening said. “It would be great to be able to have my name next to hers. She is my inspiration.”

Moening will make her sixth consecutive appearance in the state meet, her fourth as the Section 3 medalist.

“I have had a pretty amazing career,” Moening said. “I am pretty proud of my consistency throughout all of it.”

“It would be great to have my name mentioned among those people, but I have had a great career even if I don’t win,” said Moening, who will ski for Vermont in college. “I have been fortunate to have the opportunity to win twice.”

The pursuit race (5K classic and 5K freestyle) will present a new challenge for Moening and the field this year. The races will be held on back-to-back days; previously skiers had only about four hours to recoup before their second run.

“It will definitely be a change,” Moening said. “I think it will be more of a mental thing for everybody, having a day to think about where you stand instead of getting ready for your second race right after the first one. You don’t want to be thinking about if you are in front by enough or behind by too much.”

Another change this year is a sprint relay involving two skiers from each school that counts toward the team score. Moening said that could benefit the Scots, who finished as the runner-up to Forest Lake a year ago after winning the team title in 2020.

“I think the relay will really help us,” Moening said. “The strength of our team is the depth we have.”

Moening’s prep career will conclude on one of her favorite courses, Giants Ridge.

“I don’t get to ski it very often, but I love the course,” Moening said. “It is challenging, and you have to be a technical skier. It makes you work hard. You will be very tired when you are done. It’s sad thinking that it is coming to an end.”

Blake senior Ava Pihlstrom will try to become the first girl to successfully defend her individual Alpine skiing state title in more than a decade when she races Wednesday at Giants Ridge.

Last season, Pihlstrom became Blake’s third different champion in the past six years — after Maddie Dekko in 2016 and Nellie Ide in 2017 — when she finished her two runs in a total of 1 minute, 15.54 seconds and was the state meet medalist by nearly a second.

Pihlstrom was the runner-up to Orono senior Riviera Wock in the Section 5 meet by two-tenths of a second.

Edina is the defending team champion and is considered the favorite to repeat. The Hornets are led by senior Ali Anselmo, who finished sixth in 2021.

Minneapolis Southwest senior Cooper Camp, who finished third last year and is the only boys’ skier from the top seven returning, heads the boys’ field for the Nordic individual competition.

Camp led the Lakers to the team title in 2021 and has them in position to repeat. Forest Lake, the 2020 team champion, is also a contender.