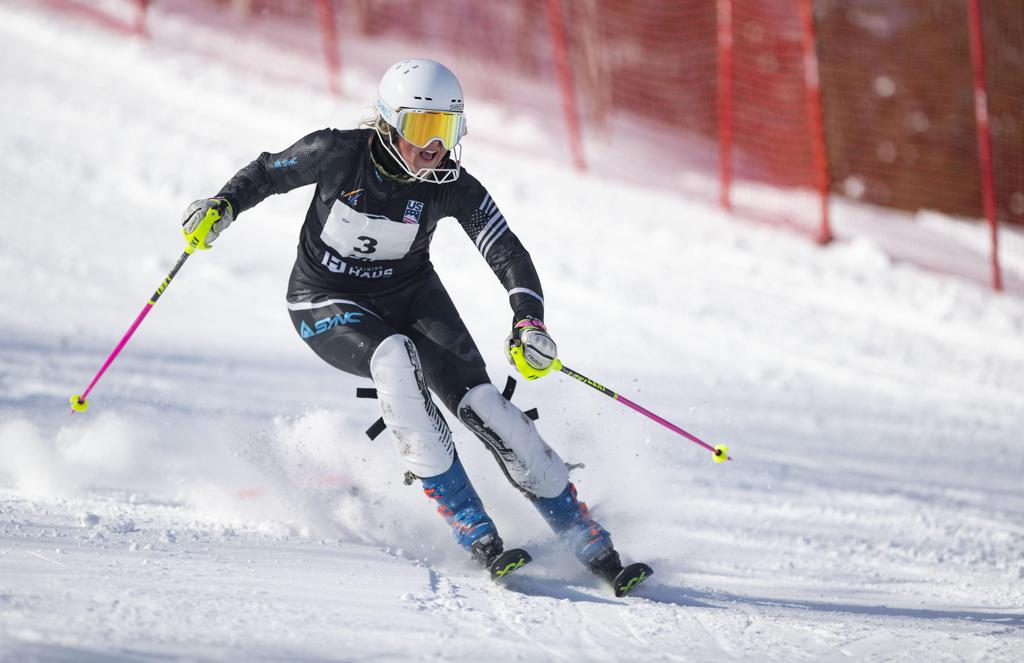 BIWABIK, MINN. – Lauren Carlson got a big response when she lunged across the finish line of Wednesday’s Alpine ski race at Giants Ridge. She felt good, too, she said. But the cheers paired with the solid run down Innsbruck — that didn’t necessarily mean anything.

“Sometimes a good, clean run isn’t fast,” she said.
In this case it was. The Duluth East senior won the individual state title, finishing two runs in a total of 1 minute, 18.14 seconds. Adam Berghult of Edina won the boys’ title with a combined time of 1:12.25.

Minnetonka won both the girls’ and boys’ team titles. The girls scored 156 points to edge second-place Stillwater at 150, while the boys won more handily — 170 points to Edina’s 144.

Wednesday began with 88 competitors in the boys’ and girls’ races — the boys starting on Giants Ridge’s Helsinki run, while the girls took on Innsbruck. They swapped ski hills for the afternoon runs on a day that hovered near 20 degrees and got progressively windier.

Carlson is a veteran of the state ski meet. She finished 10th in 2020, and last year she wiped out near the start of her second run — a memory she tried to brush aside Wednesday in her final high school ski race. She had worked all season for this, Carlson said, and she pushed herself as hard as she could.

“I can’t believe I pulled it off,” she said.

Carlson celebrated the finale with longtime Duluth ski friends who learned the sport together at Chester Bowl when they were about 5 years old. Duluth East finished fourth among girls’ teams.

Grace Torgeson, a senior from Minnehaha Academy, was close behind Carlson in second place, finishing in 1:18.49.

Berghult, too, had to exorcise last year’s state finish on the way to victory Wednesday. He was seeded second going into the final run in 2021 but fell. He’s still not sure what happened.

“I just tried to not think about it,” Berghult said.
Berghult edged Josh Nelson, a junior from West Lutheran whom he considers an aggressive skier and a lifelong friend. Nelson said he made a small mistake on the morning run, but he finished second in 1:12.56.

“He got the better of me,” Nelson said. “Adam ripped it up.”

This is the skiing finale for Berghult, who will now focus on baseball, but he sees big things for Nelson next year.

“He’ll be back,” Berghult said.

Berghult’s teammate Will Utendorfer, a senior, finished third, followed by Jakob Zeller, a senior from Eden Prairie, and Stephen Reddington, a junior from Minnetonka.

Taylor Voigt, an eighth-grader from Hill-Murray, finished third in the girls’ race, followed by sophomore Grace Horejsi of Benilde-St. Margaret’s and defending state champion Ava Pihlstrom, a senior from Blake.