After open-heart surgery, a new set of goals for Mounds Park skier

Nordic skier Erin Quam's race on Jan. 9 was the senior’s first with the varsity since open-heart surgery only four months ago to address a newly discovered artery problem that, if left unchecked, could have been fatal. 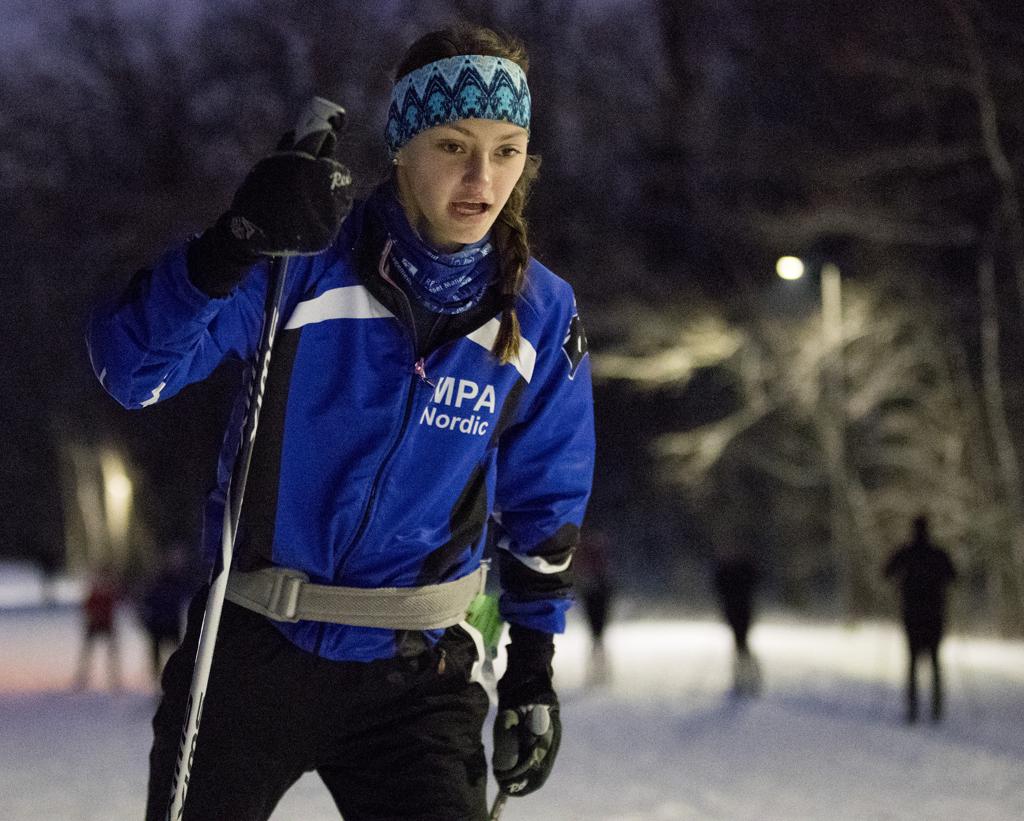 Cheers greeted Mounds Park Academy Nordic skier Erin Quam as she glided around a corner near the end of her race Wednesday. Quam had led her team to a conference championship last season, but this 5-kilometer trek was different.

The race was the senior’s first with the varsity since open-heart surgery only four months ago to address a newly discovered artery problem that, if left unchecked, could have been fatal.

Her goal was different from last year, too: This time she just wanted to finish, and without stopping.

Quam’s mother, Anne, unsure what to expect from her daughter, felt a rush of excitement when someone yelled, “Here she comes; it’s Erin!” A joyous noise rose up from the snow as a dozen parents, some from other schools, hollered their support.

She finished the course at Hyland Park Reserve in Bloomington. Without stopping.

“There was nothing like seeing her come around that corner,” Anne said.

Placing seventh among eight Mounds Park skiers was something new for Quam. Last year, she routinely finished as one of her team’s top skiers and led the St. Paul private school to the Independent Metro Athletic Conference championship. After her strong junior season, “a spark ignited,” said coach Jerry Slater, and “everyone was anticipating a good senior year.”

Instead, recovering from major surgery changed Quam’s goals. Not that she is complaining. She is relieved to not be among the estimated one or two youth athletes per 100,000 who die each year from unexplained sudden death. Most coronary artery anomalies like hers are only discovered after tragedy. Quam’s was caught in time, even though the correct diagnosis took years.

As a youngster, Quam expressed concerns that her heart “felt weird and sometimes hurt,” she recalled. Doctors considered it to be anxiety symptoms.

Quam arrived at Mounds Park Academy and joined the cross-country team as a seventh-grader. During workouts, she needed more water breaks and complained more about pain than teammates.

“I spent most of my time on the cross-country team believing that I was weaker than the rest of the kids,” Quam said.

During training last August, runners were tested on how many laps they could turn in 20 minutes. It’s called a threshold run — and it pushed Quam past hers.

Halfway into the high-intensity workout, Quam felt pressure in her chest and a faster heartbeat. Worse, stopping the workout didn’t calm the situation. A week later, she got her long-awaited answer.

When Quam described heart and chest pain triggered by exertion, she “raised one of the few red flags we have,” said Dr. Charles Baker, a cardiologist with the Children’s Heart Clinic of Minneapolis. “There was no way she was leaving my office without an echocardiogram.”

The test, using ultrasound waves, revealed a coronary artery anomaly, which limits blood flow to the heart and is the second-leading cause of sudden death in athletes. The first is hypertrophic cardiomyopathy, a condition that has kept DeLaSalle basketball standout Jarvis Johnson from playing for the Gophers.

Quam underwent open-heart surgery in October at the Mayo Clinic in Rochester. With her final season as a runner ended early, she set a goal of getting back to skiing, even at a reduced pace.

“I never thought about not doing Nordic,” said Quam, who received a gentle hug from Slater when she returned to the team. “It has been kind of a slow process coming back, so I have to be patient. But I still love skiing even if I’m not doing it at the same level that I used to do it. I’ve had as much fun as I’ve had before. Being able to go out there and be with my team — I wouldn’t be able to do that if I quit.”

“I was definitely nervous,” Quam said of her varsity season debut. “I didn’t want to have to quit. But I was excited to be back and that overpowered my nerves.”

Before pulling on her blue Spandex racing top, Quam noticed the 6-inch scar on her sternum. She called it “a little reminder this race was different than the others.”

She also experienced something new during the race. Teammates and even competitors checked in with Quam as they passed, asking if she felt OK and encouraging her to keep going. Quam’s father, Steve, waited at the halfway point of the course should his daughter feel the need to stop.

When she arrived at the 3K mark of the classic race, Erin said, she “was tired but I knew the race was almost over. I felt pretty normal, and I guess I wasn’t expecting to feel normal.”

As for the unexpected cheering section near the finish line, the reserved, laid-back Quam said: “It was so nice. I was very smiley. It was a very nice feeling.”

For good friend and Mounds Park junior Declan Dahlberg, Quam’s return to skiing has helped ease the pain of a difficult autumn.

“It kind of brings you back to reality, and you realize how important friendships are,” said Dahlberg, who drew inspiration from Quam en route to winning the Class 1A cross-country individual state championship in November.

“You don’t see how strong people can be until something happens,” he said.

Since Quam cannot keep pace with the Panthers’ top skiers in practice, Dahlberg slows his pace to make sure his friend isn’t alone.