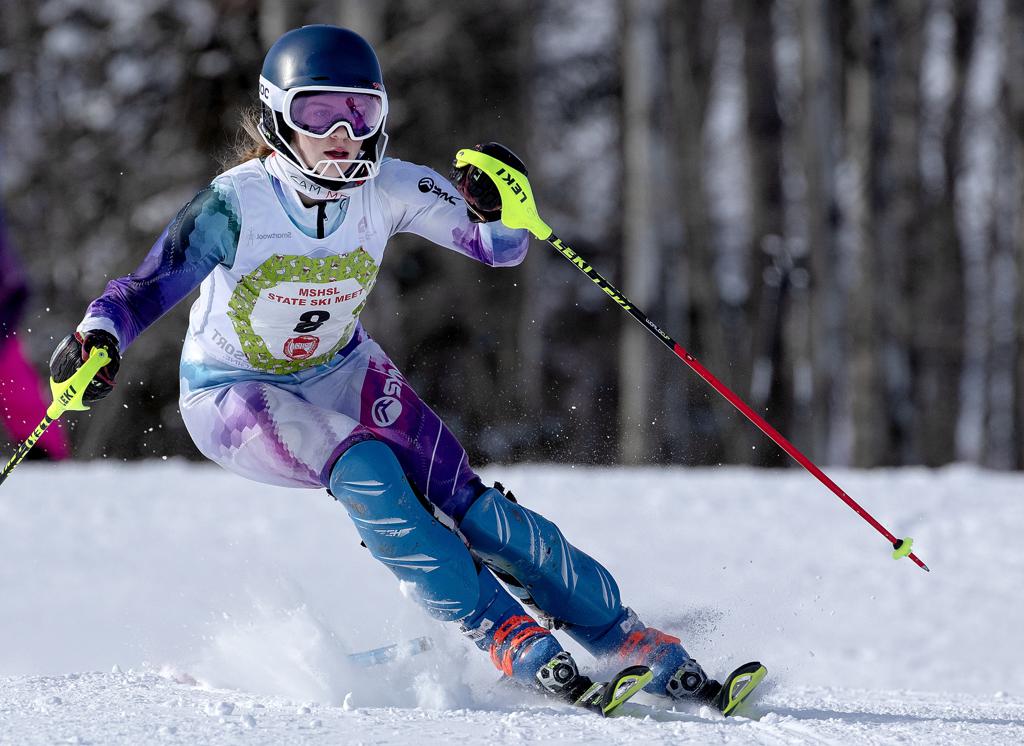 Peyton Servais of Lakeville North made her way down the Innsbruck course Wednesday at Giants Ridge in Biwabik en route to the girls' individual Alpine title. Photo: CARLOS GONZALEZ • cgonzalez@startribune.com

Don’t get Peyton Servais wrong. The Lakeville North sophomore was thrilled to win the individual championship Wednesday at the Alpine skiing state meet at Giants Ridge in Biwabik.

In fact, in terms of things she’s accomplished on a slalom ski course, she had a hard time pinpointing anything she’s been more proud of.

Servais was second after the first run of the meet, trailing leader and defending champion Becca Divine of Eden Prairie by one-hundredth of a second. She slipped past Divine on the second run, winning with a combined time of 1:11.18. Divine finished second with a time of 1:11.23.

The reason for Servais’s trepidation was how unexpected it was. Divine, as she had all season, defeated her in the Section 6 finals. Two other top racers — Lakeville South’s Lauren Geary, who finished third, and Hermantown’s Ashley Winberg, who was fourth — also had regularly finished ahead of her.

“This morning, I had not expected to do this well,” Servais said. “I felt fine, but Lauren Geary, Becca and Ashley Winberg, they’re all super good. They’ve beaten me in almost every race I’ve had against them this year. I was expecting to come out fourth. Or less.”

After her first run, however, Servais knew this might her day. What she had thought was a disappointment turned out to be better than she had thought.

“I was mad about my run because I messed up and almost fell,” Servais said. “One of my teammates was like ‘You’re only a hundredth behind Becca.’ I was like ‘Okay!’ ”

Divine said a mistake at the end of her second run opened the door for Servais. “I knew it was gone as soon as I did that,” she said. “But she’s worked hard. I know she deserves it.”

The victory capped off a breakthough winter for Servais. A successful USSA season had vaulted her to the top of the national slalom skiing rankings for skiers in the U-16 age group, although she has since slid back to third.

Still, the idea of being a state champion was at the same time gratifying and a little bit unsettling.

“It feels kind of weird,” she said. “I feel bad for beating Becca. It was her senior year and she won it last year. But it feels awesome. It’s really cool.”Lakeville South, led by Geary’s third-place finish and an unexpectedly good run by freshman Erin Otteson, won the team championship, defeating runner-up Orono by a single point, 153-152.

What Mounds View senior Kaarl Damberg did Wednesday afternoon probably should have happened a year ago.

Damberg went out blazing in his first run of the day, then turned in a strong technical race in the second to win the boys’ individual championship in a time of 1:11.72, finishing .38 of a second ahead of runner-up Luke Conway of Minneapolis Washburn.

The victory eased the hurt of 2018, when Damberg also led after the first run but fell on the second and ended up 19th.

“Last year was going good and then it wasn’t going good,” Damberg said. “Today, I was just, like, ‘Go. Don’t think about last year. Just think about today and ski.’ ”

So focused Damberg was on simply skiing and not thinking too much that he had no idea he was in the lead after the first run. Well, not officially.

It was all part of his strategy. “I never want to know,” he said.

Damberg said his victory made years of hard work pay off and the disappointment of last year melt away.

“I started skiing at 2 years old. Working out every day in the summer and in the off-season, practices three or four days a week, races on Saturday and Sunday,” he said looking back. “Everything outside of school has been skiing for the last 16 years. It’s awesome. Absolutely at the top.”

Edina won the team title, behind brothers Adam Berghult, a freshman who finished third overall and Carl Berghult, a senior who finished 13th, with 150 points. Minneapolis Washburn was second with 157.