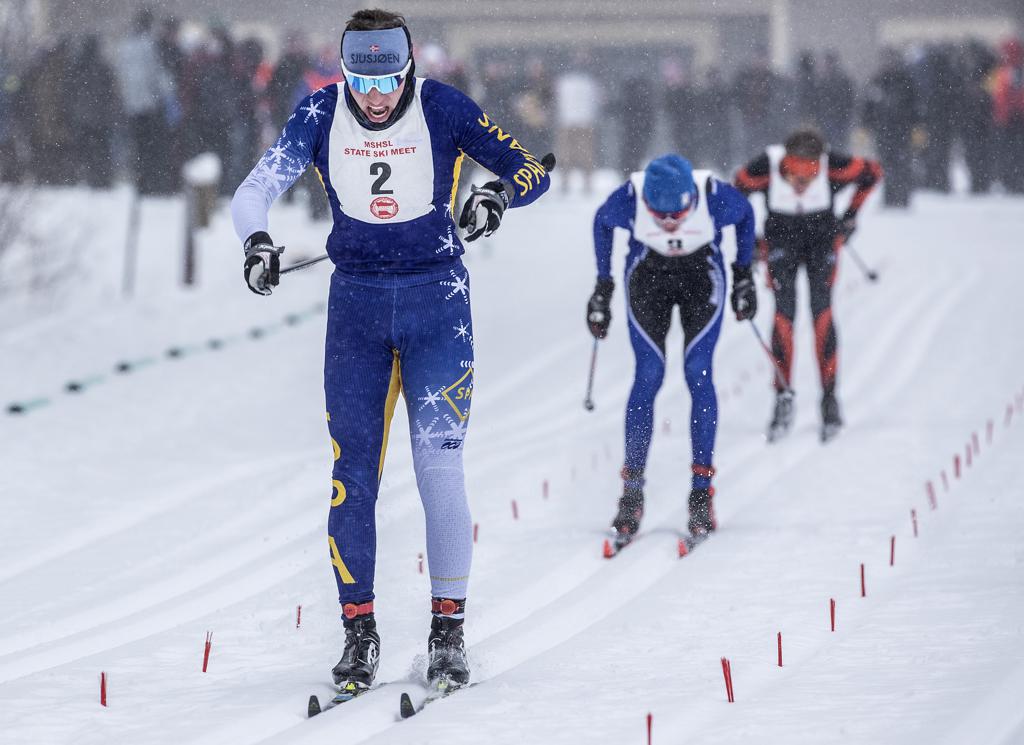 Peter Moore’s sixth-grade dream probably didn’t include a driving snow squall, but to the St. Paul Academy senior, the conditions for the decisive classic-style race at the Nordic skiing state meet at Giants Ridge in Biwabik were perfect.

Moore overcame an 18-second deficit after the skate-style opening race Thursday, passing defending champion Garrett Beckrich of Grand Rapids about a kilometer into the boys’ classic race and holding on the win the pursuit championship. His time of 30:16.0 was a full second ahead of runner-up Alex Nemeth of Sartell-St. Stephen/St. Cloud Cathedral. Mora’s Cooper Lennox was third and Beckrich finished fourth.

“I’ve been thinking about this since sixth grade,” Moore said. “It’s every Minnesota high school skier’s dream to win this race. It’s incredible.”

Beckrich, who primarily trains as a biathlete and skied just five high school races before to the state meet, said he knew he was in trouble when he looked out of the window between races and saw the snow and wind start to pick up.

“I knew then it wasn’t a good thing for me,” he said. “I don’t practice classic enough.”

Moore was aware of that as well. He knew he was facing a big deficit, but his versatility and the worsening conditions were in his favor.

“I’m pretty confident in my classic skiing,” he said. “I know 18 seconds is a pretty big gap, but the leader, Beckrich, is a biathlete so he skates more than he classics. It also played to my advantage that we were skiing in fresh snow, which is slower, so I was able to jump in his tracks.”

Moore caught Beckrich at the top of a hill, lost the lead on a flat portion at the top, then regained it for good on a downhill slope.

“I kept a lead by about five meters until the finish,” Moore said.

What he didn’t know was that Nemeth and Lennox were also making up time. Moore held them off in a final sprint, the three of them finishing less than two seconds apart.

“It was incredible, coming into the last downhill,” Moore said. “I started thinking ‘I got this.’ Double-poling to the finish was surreal.”

Was Moore at all worried about being caught at the end?

“I wasn’t thinking about that at all,” he said with a laugh.Sartell-St. Stephen/St. Cloud Cathedral rode top-20 finishes from the Nemeth brothers — Alex, Will and Zach — to the boys’ team championship with 407 points. Forest Lake was second with 397 and Armstrong third with 387.

Mara McCollor of Wayzata and Lucinda Anderson of Armstrong raced for the finish line.

Wayzata’s Mara McCollor stood right near the end of the race course, hugging everyone she could reach, following her second consecutive girls’ pursuit championship.

She was positively ecstatic after spending more than two kilometers dueling with Armstrong’s Luci Anderson before pulling away at the end. McCollor became the first girl skier to win consecutive titles since Jessie Diggins did it for Stillwater in 2007 and 2008. Diggins ended up winning a final championship in 2010 before going on to international and Olympic success.

“Going back-to-back is beyond anything I could imagine,” said McCollor, who finished in a time of 34:51.0, 1.2 seconds in front of Anderson. “It’s crazy.”

It certainly wasn’t easy. McCollor, a senior, trailed Anderson by 12 seconds after the Skate-style race, but her strength is in her Classic-style racing and she caught Anderson about a kilometer into the second race. The two dueled the remainder of the race.

Anderson was happy with her lead after the first leg of the race but admittedly was never comfortable.

“I was confident, but I knew Mara was a really strong classic skier, so I was a little worried about the pressure from behind,” she said.

The two were neck-and-neck heading into the final 200 meters before McCollor gained an edge and never relinquished the lead.

“I don’t know if there was a moment where I could say I knew I was going to win,” McCollor recalled. “It was meter-to-meter. It was crazy.”

“She’s an amazing double-poler, so I was worried when we got to the end that she would zoom right by me, which happened,” Anderson said. “But it’s OK. I’m fine with it. I was really happy to be skiing with her.”

Anderson’s disappointment was tempered by her performance helping Armstrong win the girls’ team championship. The Falcons won with 412 points. St. Paul Highland Park was second with 384 and Stillwater third with 381.

“I’ve been skiing with these ladies for six years now, so winning the state meet just means a lot to us,” Anderson said. 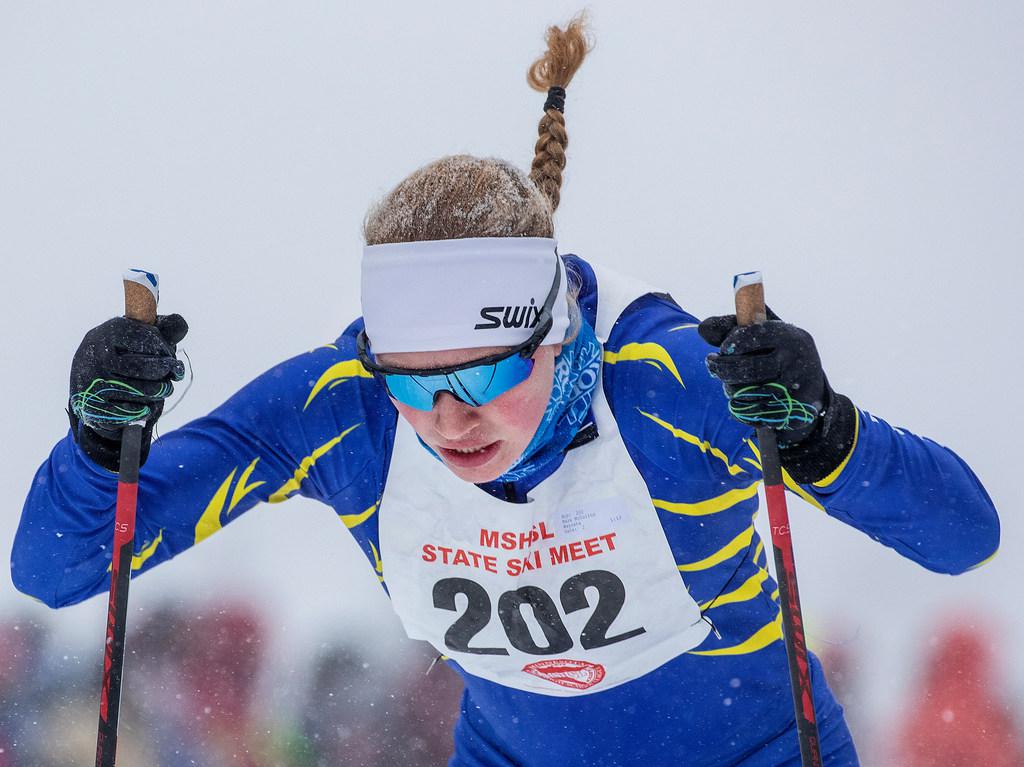 Mara McCollor of Wayzata during the girls' classic 5K race at the Nordic skiing state meet at Giants Ridge.